The Australian Cyber Security Centre has released the 2016 threat report.

Between July 2015 and June 2016, CERT Australia responded to 14,804 cyber security incidents affecting Australian businesses, 418 of which involved systems of national interest (SNI) and critical infrastructure (CI). The incidents affecting SNI and CI are broken down by sector below.

As CERT Australia relies on the voluntary self-reporting of information security incidents from private, commercial and government sources throughout Australia and internationally, CERT is unfortunately not able to get a complete view of all incidents. A large number of businesses which have been victims of a breach have paid a bitcoin ransom or fixed their system without notifying CERT or their cyber insurance provider.

What does a typical cyber security compromise look like?

The attacker sends a spear phishing email with a malicious link to their target which when opened will execute malware creating an entry into the network.

After access has been granted the attacker will continually monitor and study the network, search for domain administration credentials and possibly propagate through other linked networks. As an example, an adversary will regularly access the network to gain updated user credentials, thus avoiding losing access because of password changes. 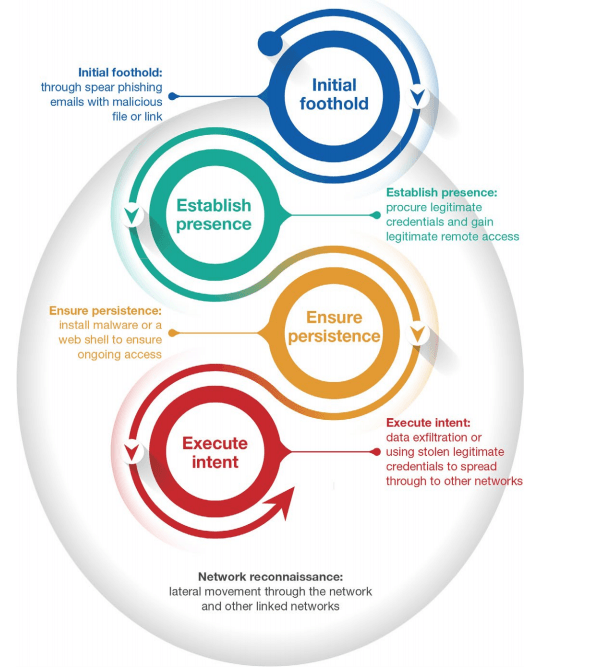 Once in the network, adversaries will attempt to obtain legitimate user credentials with the goal of gaining legitimate remote administrative access. After legitimate credentials are obtained, the adversary will transition from malware dependant tradecraft to the use of Virtual Private Network (VPN), Virtual Desktop Infrastructure (VDI), or other corporate remote-access solutions combined with software native to the organisation.

Adversaries strive to install malware or a web shell to ensure ongoing access should their legitimate accesses cease to function. Malware is typically configured with a limited “beacon rate” to minimise network traffic and evade network defenders. However, web shells are increasingly being used as they generate zero network traffic and are difficult to detect unless the adversary is actively interacting with them.

Once persistent access is gained, the adversary will execute their intent. This intent could be anything from data exfiltration to enabling lateral movement to the real targeted organisation, exploiting circle of trust relationships between the organisations.

The Australian Government Information Security Manual (ISM) assists in the protection of official government information that is processed, stored or communicated by Australian government systems, and is available at http://www.asd.gov.au/infosec/ism/index.htm